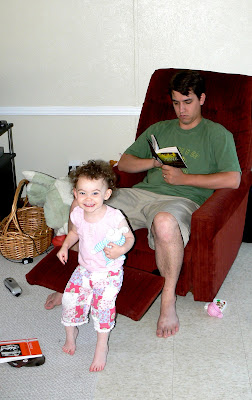 We've found that the leg rest on our rocking chair makes a great horsey ride for M. What else allows you to read a book and entertain a 23 month old at the same time?
Posted by K Magill on June 10, 2009 No comments:

Email ThisBlogThis!Share to TwitterShare to FacebookShare to Pinterest
Labels: toddlers 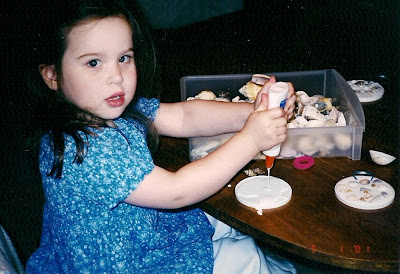 Here's a great craft for toddlers from my aunt and cousin. It requires a lid from a margarine container (or I imagine that a yogurt lid would work too), a large amount of Elmer's glue, a piece of string or ribbon, and items to decorate the suncatcher.

First fill the container with Elmer's glue and decorate with shells, etc.

Let the glue dry completely. The glue dries clear and can be popped out of the lid.

With a sharp point make a hole in the suncatcher and put a string through it. 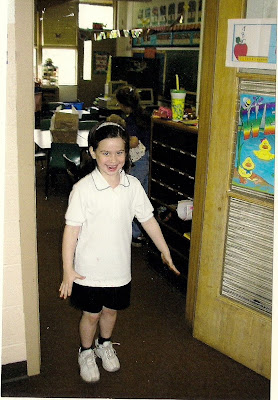 They take a picture of their daughter stepping over the threshold of the classroom of each elementary grade. That way they capture the very last moment of "kindergartenhood" etc.

As she stands at the threshold, my aunt says something like. "This is the last moment of your being a kindergartner. When you step through that door you'll be first grader. Are you ready?...One...two...three- step through!" (Hugs and excitement!) "Now you're a first grader!"

Does your family have any fun traditions/ activities you do on the last day of school? I'd love to hear about them!
Posted by K Magill on June 05, 2009 3 comments:

Email ThisBlogThis!Share to TwitterShare to FacebookShare to Pinterest
Labels: traditions 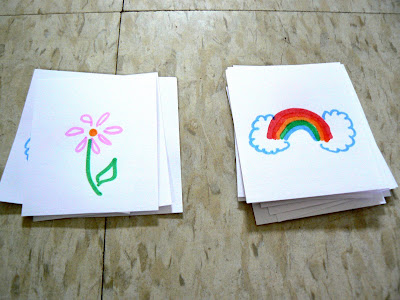 We've been working on a new concept lately- the concept of "same and different." To practice, we've been playing a little game.

I made a set of picture cards out of halved index cards. I drew four simple pictures and made four copies of each. Then I shuffled the cards and turned over two cards in front of M and asked her what the pictures were.

I then asked her "Are they the same?"

If they were different, I would say, "No, they're different," and we would shake our heads sadly together. 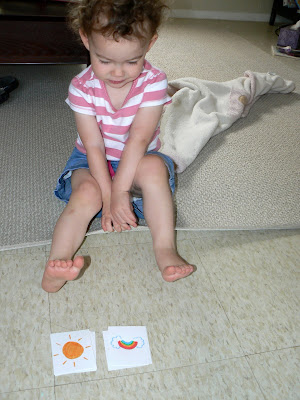 If they were the same picture, I would say "Yes!!! They're the same. Let's clap!" and we would clap our hands together. M loved the clapping- got very excited. Understanding the concept is still a work in progress, but she has fun with the practicing! 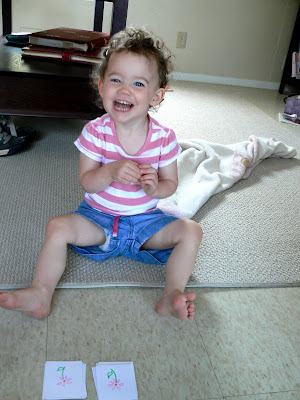 I suppose it's also good preparation for eventually playing the memory matching game together.
Posted by K Magill on June 01, 2009 4 comments: