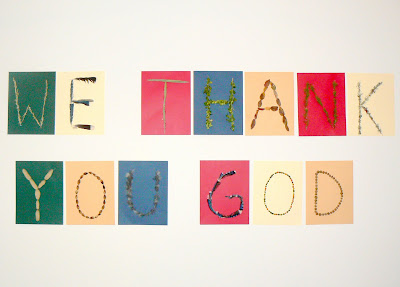 Last year around Thanksgiving time, M and I made a thank- you banner to the Lord out of items we had found in nature. We really enjoyed the activity, but I remember saying at the time that I didn't know whether or not we would continue it as a family tradition.

Those of you who have been following this blog for a while know that shortly after Thanksgiving last year our family had a fire that wiped out just about everything in our apartment. The Thanksgiving banner was singed, but was still on the wall when we walked through our burned apartment for the first time. It became a powerful symbol to us of God's goodness through difficulty. 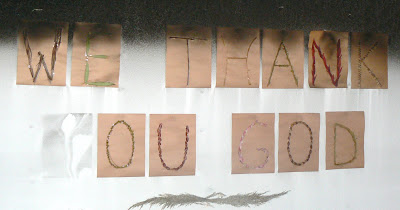 When Thanksgiving rolled around this year there was hardly a question in my mind about whether or not we would do the banner. The year has brought so much to be thankful for, and I love the potential the banner has for drawing our attention to both the continuity and changes in our family history. 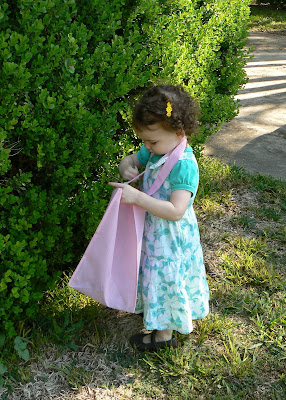 This year it wasn't just M and I collecting bits and pieces from nature, but little baby G was with us too! And instead of taping the words onto a rented apartment wall, we put them in the living room of a home that is our very own. In the space of one year so much has changed, but God's grace to us has been very constant!

(I don't know if you can see it or not, but several letters are made out of some very beautiful blue bird's feathers that we found in the park as we were hunting for nature materials- it was a very fun find!)
Posted by Katey on November 29, 2009 No comments:

Email ThisBlogThis!Share to TwitterShare to FacebookShare to Pinterest
Labels: thanksgiving 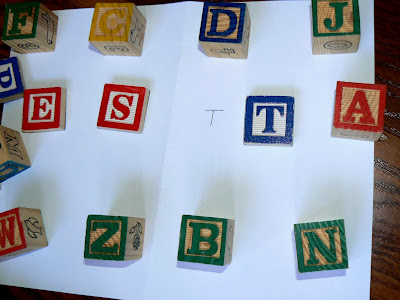 I'm sure mothers have been doing this activity for a hundred years, but it just now occurred to me. M loves alphabet puzzles, and sometimes I wish we had more of them for variety sake. The other day, though, I realized that her wooden alphabet blocks could be used in much the same way.

I gathered some blank paper and a pen and wrote out a variety of letters on a page, spacing them about 2 1/2 inches apart. Then I found blocks with letters that matched and had M place them in the correct places. 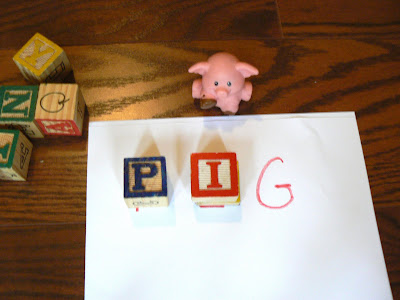 Next, we decided that rather than random letter placement, we would spell words (starting with M's name, of course). M seemed to feel very grown up to be able to make her own name, and the names of each of her toy animals.
Posted by K Magill on November 20, 2009 2 comments:

Email ThisBlogThis!Share to TwitterShare to FacebookShare to Pinterest
Labels: prereaders 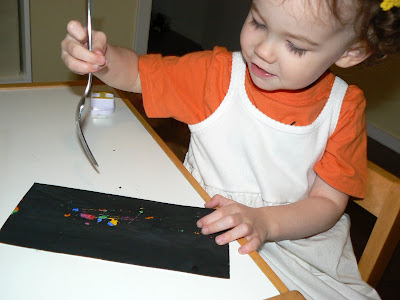 My mom recently send M a fun craft in the mail. It was a sheet of cardboard that she had entirely colored with different colored crayons. She then painted over it with black tempera paint.

M's job was to scratch off designs onto the sheet with a spoon, fork, or just her fingernail. Very colorful, fun results! 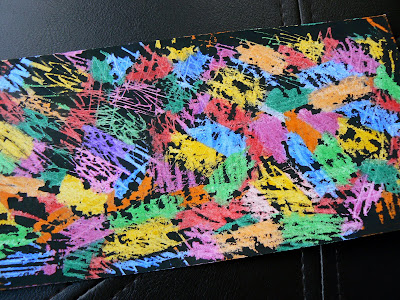 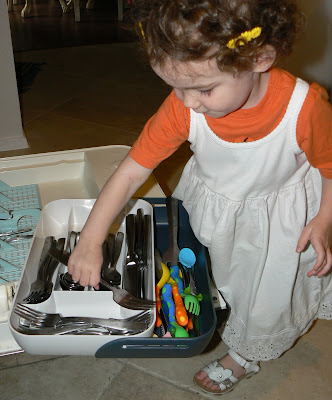 Sorting silverware into the silverware drawer is M's latest contribution to work around the house. She, of course, is tickled to be involved in the process of putting dishes away.

The only problem is, when I teach M a new skill she often wants to do it every time it needs doing. So unfortunately, the times when I'm busiest, and just need to do the tasks myself also become the times I have a frustrated, unhappy toddler on my hands. Do any of you struggle with this problem? Any suggestions?
Posted by K Magill on November 13, 2009 1 comment: 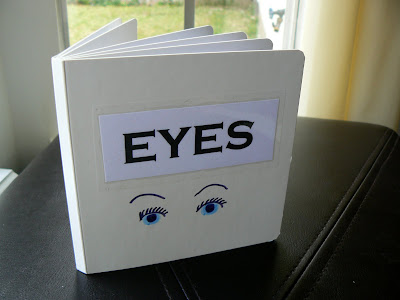 I have been noticing lately how much G's eyes are drawn to pictures of eyes in books we read together. It has made me think, "Wouldn't it be nice if she had a book full of eyes from people that are significant in her life?"

And since I still have some blank board books left over from the bunch that my mom gave me a while back, I decided to make a book this morning using pictures I printed off of our computer. (I use packing tape to laminate the pictures and attach them to the pages) 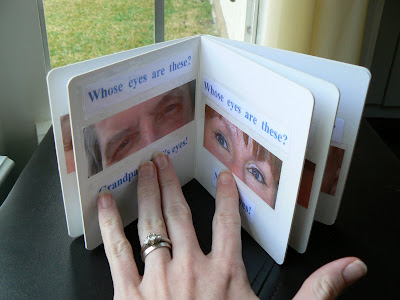 Each page has the picture of the eyes of one family member and the question, "Whose eyes are these?" along with the answer. G seemed to enjoy looking at the pictures when we read the book this afternoon, and M really enjoyed showing it to her little sister and asking her the questions. 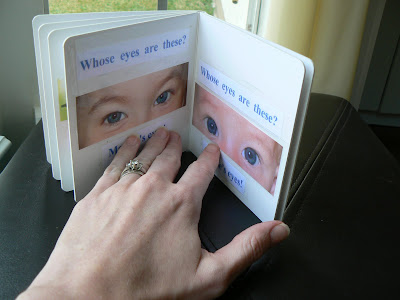 Email ThisBlogThis!Share to TwitterShare to FacebookShare to Pinterest
Labels: babies 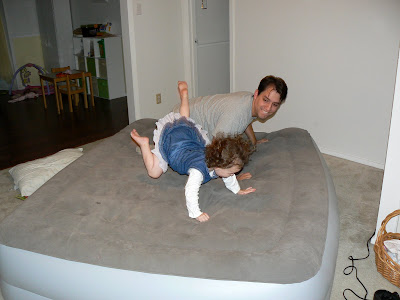 After our guests left this past weekend, my husband let some of the air out of the air mattress to create just the right amount of bounce for springing M high in the air. Lots of giggles, let me tell you...but honestly, it was also a smidge dangerous.

We had to make sure there were no sharp, hard objects around the perimeter of the mattress, and even then we had to be careful how high we bounced her- it was really powerful stuff! 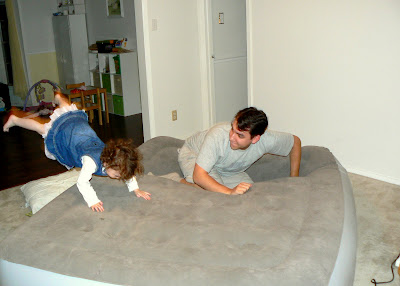 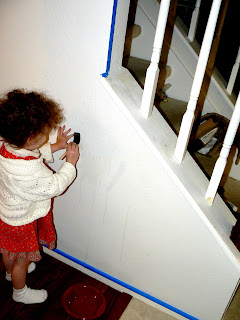 Here's M "painting" our dining room walls with water while I painted on the other side of the room with green paint. She LOVED it (and it kept her out of the wet paint)!
Posted by K Magill on November 09, 2009 No comments: 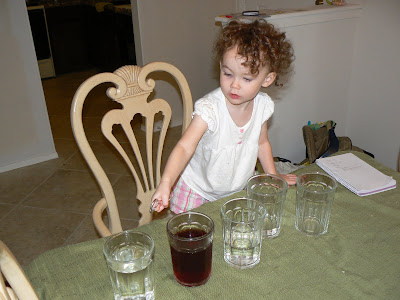 I don't know about you, but I find that my toddler gets particularly restless around dinner time. Of course, this doesn't work well for making dinner...

Here's something I did one evening that helped keep everyone happy: gathered the glasses that were going to go on the table that night and filled them with water to different levels. I gave M a small metal instrument to ding the cups (along with strict instructions not to touch the water itself) and let her serenade me with "water music" while I worked. Fun!
Posted by Katey on November 02, 2009 2 comments: