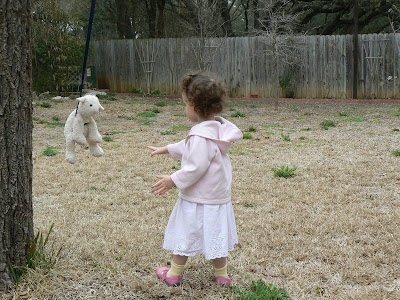 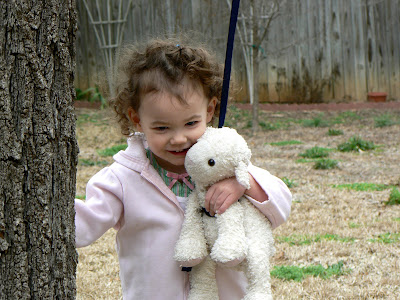 We had SO much fun with this morning with this activity- tied a ribbon around M's favorite stuffed animal, tied the other end to a tree branch and let her push Sheepy on the "swing." Of course, then all the other little friends need to have a turn too! 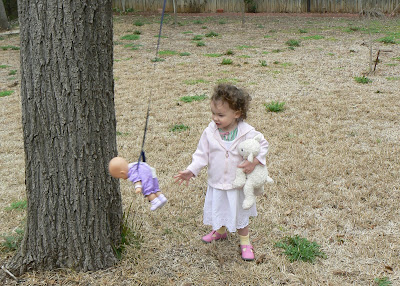 This idea came from The Toddler Busy Book. There seem to be quite a few other good ideas here too. I'll keep you posted!
Posted by K Magill on January 22, 2010 3 comments:

I was reminded the other day of the value of spending time outdoors with my girls even when I don't have any particular ideas for activities with them.

For a number of reasons, our poor backyard has been looking like a jungle lately- lots of prickly weeds have been springing up here and there. My husband has a lot on his plate right now; so one morning, I decided to go back there with a screwdriver and try to get rid of some of the weeds. M wandered around the yard while I worked.

After I had been working about 20 minutes I saw that one of the weeds had a snail shell on it. I called M over to show her the live, slimy snail living inside. She was transfixed. I gave him to her to carry around, and she watched over him like he was a babydoll.

As I worked, I found more and more snails of various sizes, and at each, M was delighted, calling them mommies, daddies, or babies depending on their sizes. She set them on the patio, and pretty soon they oozed out of their shells enough to slide slowly along.

There were so many moments of childlike wonder that I couldn't have planned if I had tried.

Much of the time, it is easy for me to slip into an attitude of instant gratification with my children. If something doesn't seem interesting or fun to them in the first five minutes of trying it, I often abandon the effort. Adopting that attitude with nature doesn't work very well though. One can't expect the outdoors to show its little glories on demand. The snail surprise reminded me of the importance of being content to while away empty, unexciting time outdoors for the sake of the wonderful serendipity of spotting a red- headed woodpecker one day or a spider spinning a web the next. 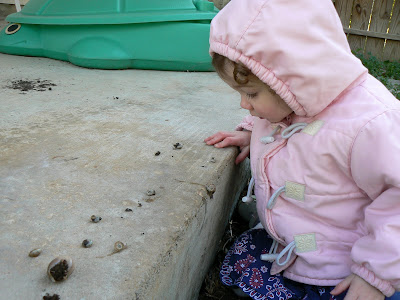 I don't usually write posts about the activities that don't turn out so well, but this morning's activity was so awful that I just had to share.

It was supposed to work like this (I read about the idea in a book):

1. Using masking tape, mark several familiar shapes on the carpet.
2. Using different actions, tell the child to go to each shape. (run to the square, hop to the triangle, etc)
3. Child runs, frolicks and plays while learning her shapes!

M did not think this sounded like fun. (I think partly as a reflection of the terrible twos- following directions is something one has to put up with all day to stay out of trouble- it is NOT a fun game). I didn't want the time and effort to be a total waste; so I told her that she could give ME directions for moving from shape to shape.

That was mildly more interesting to her- but only mildly. I should have just given up on the whole idea, but I was stubbornly determined to make it fun. Knowing how much she enjoys it when we turn somersaults together, I told her that she could tell me to somersault to the different shapes.

Apparently my tumbling ability needs a little work. Instead of saulting to the diamond, I catapulted crookedly into M, kicking her in the head with my feet and sending her flying backward into the wall. Poor little girl...I'm afraid this incident has ruined our somersaulting fun for a long while!
Posted by K Magill on January 21, 2010 1 comment:

Email ThisBlogThis!Share to TwitterShare to FacebookShare to Pinterest
Labels: miscellaneous 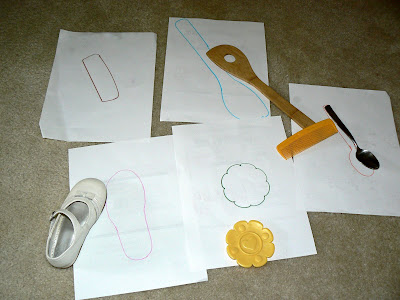 1. Gather a few distinctively shaped objects
2. Draw their outlines in marker on pieces of scrap paper
3. Spread the outlines in front of your toddler
4. Take the objects one at a time and ask the toddler to match the object to its outline.
5. Then try it the opposite way: have the toddler match outlines to objects.
Posted by K Magill on January 20, 2010 4 comments:

Email ThisBlogThis!Share to TwitterShare to FacebookShare to Pinterest
Labels: prereaders 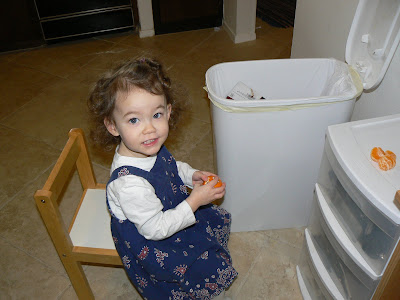 My mom discovered over Christmas vacation that M can easily peel a clementine, and it keeps her focused and happy for about 8 minutes. Of course, she then has the pleasure of being able to share the slices with all of us!

What are some easy ideas you have found for helping toddlers stay busy on their own when you can't watch them too carefully?
Posted by K Magill on January 19, 2010 4 comments: 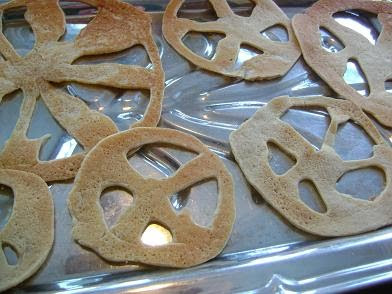 Aren't they cute? Heavenly Homemaker tells you the secret for making them quickly and easily over here!
Posted by K Magill on January 14, 2010 No comments: 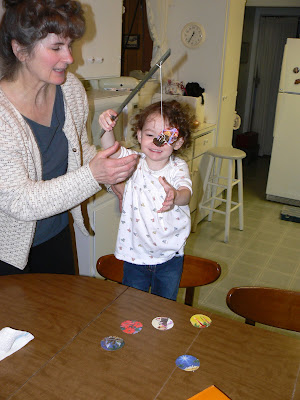 Over Christmas my mother and M had fun playing a magnet fishing game that my mother made. The "fishing pole" was a ruler with a string. The "hook" was a magnet tied to the end of the string. On the table was the "pond," a number of cardboard circles cut out of Christmas cards with a paper clip attached to each one.

M's job was to catch the circles one at a time. On the back of each circle was a number (one, two, or three). When she caught the "fish" she would look on the back, identify the number and then got to take that number of candies (my mom used the tiny dot candies that are stuck to a paper). Great fun! 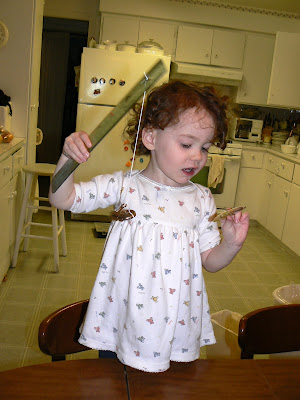