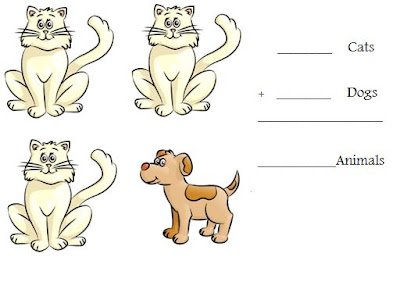 I'm afraid I've never liked math very much (much to my engineer father's chagrin). Furthermore, my aptitude has tended to follow my interest. Standardized test results always showed me to be a student very much skewed toward the verbal end of things.

It's not my particular desire to have my children inherit this math aversion, but lately I've realized that my educational activities with M are starting to show the same imbalance (a little girl who is starting to work on reading sentences probably should not be struggling to recognize the number 4! :-)

So... I set my mind to think of good math activities, but try as I might, I kept coming up blank! It seems that perhaps I am lacking in the math creativity department as well (I guess I never realized that this was its own department!). I mentioned my frustration to R one evening, and without missing a beat he came up with this activity.

I was impressed. Not only is the activity fun for M, but once we tried it out, I realized that it was exactly the right next step for M's level of math understanding. R said that after number recognition and counting, the next step should be understanding the concept of discrete quantities. For example, 3 cats and 1 dog.

I don't know how many times we will have to do this activity for the concept to begin to really sink in, but I have a good feeling about its effectiveness.

I've been thinking about investing in an abacus. Have any of you used one with your little ones? Do you have any other suggestions for early math activities? I'd love to hear them- because I still draw a complete blank when trying to think of math ideas! :-)
Posted by K Magill on July 03, 2010

Manipulatives are great for this age. Pattern blocks to teach shapes, symmetry (you make a figure, place a ruler down beside it, and have her create the same figure on the other side), adding or even fractions (4 purple blocks out of 10 blocks total, etc.). Card games are great. War teaches numeric value, dominoes can teach adding (you can sort out the lower value dominoes and then play a war of sorts--each player lay down one domino), do scavenger hunts around the house (we have two pictures in the living room, three in the bedroom, and two in the kitchen. How many do we have in all?). Have fun!

Oh! So many great ideas! Thanks, Sarah. I think I will try War today!