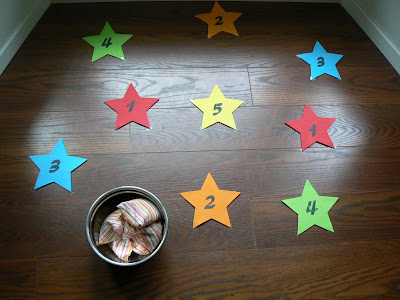 In my mind a bean bag toss is the quintessential party game- simple, quick, and the difficulty level is easily adjusted for a wide age range. Growing up, we had a big, wooden clown target with holes that I imagine my mother purchased at a garage sale. By the last time we used him I think most of the paint had worn away from his red clown smile and the wood was starting to warp.

Though an avid garage saler myself, I haven't yet had the good fortune to run across any ready-made targets and I couldn't stomach the idea of paying twenty dollars or more for a set that would likely seem chintzy anyway. So, I scrounged around for the makings of a homemade set.

An old maternity shirt furnished the material for the bean bags (which I filled with yellow split peas from the split pea treasure hunt mentioned below). For the targets I used foam stars from the craft store that I stenciled with numbers. The stenciling proved to be a bit more work than I had counted on. I had planned to buy some cheap number stencils at the craft store, but couldn't find anything under $7 which seemed a bit much. So, instead, I printed some large numbers off on cardstock, cut them out with scissors, taped up the incision and used those as stencils. (I found that it is important to use a very dry brush or they run and drip easily)

We taped them on the floor with packing tape. I was a little afraid that the tape wouldn't hold up to the thrown beanbags, but it did fine (maybe it wouldn't have if the kids had been older and rougher).

It wasn't anything spectacular, but it looked fine, worked fine and saved me a little money!
Posted by K Magill on August 08, 2010

Thank you for this wonderful and inexpensive idea for my 4 year old's party! I love the idea that they are just paper on the ground! I just made my beanbags with rice in it. It's perfect and exactly what I've been searching for.