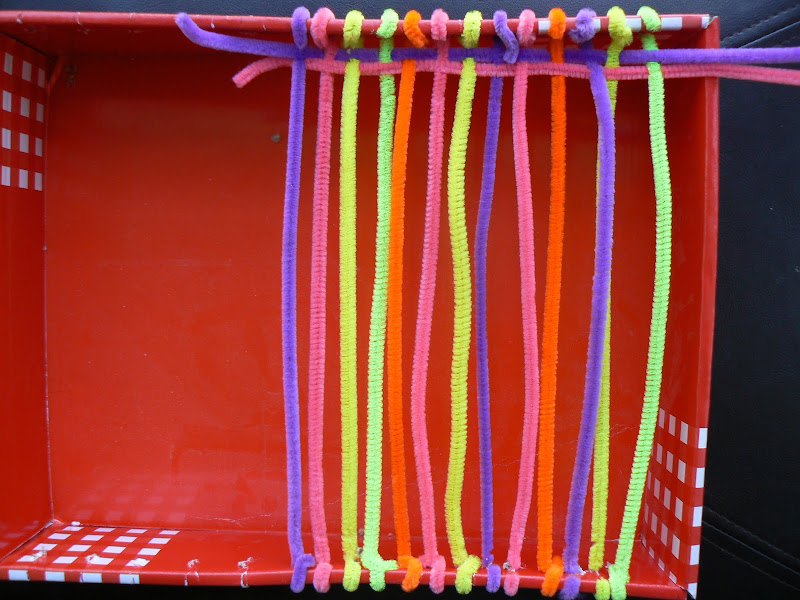 The pipe cleaners I received in a free package from craftprojectideas.com are particularly fluffy, and I've been considering for a while what to do with them.  Today, I finally spread them out on the table to help get the creative juices flowing. It didn't take long before I had two curious little girls at my side, eager to partake in whatever fun was to be had.

They seemed to get an inordinate amount of joy out of my shaping some of them into letters at their requests. 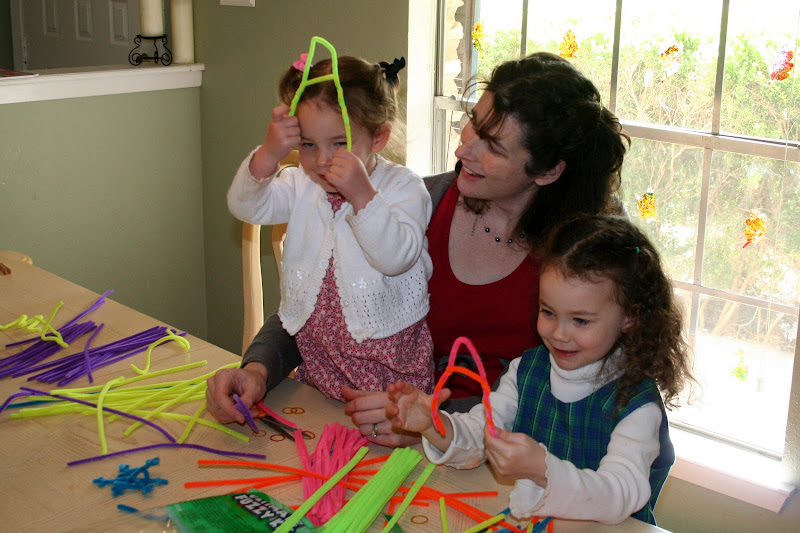 After that, we got started on a project I've wanted to try for a while- borax snowflakes (more on that in an post coming soon!) 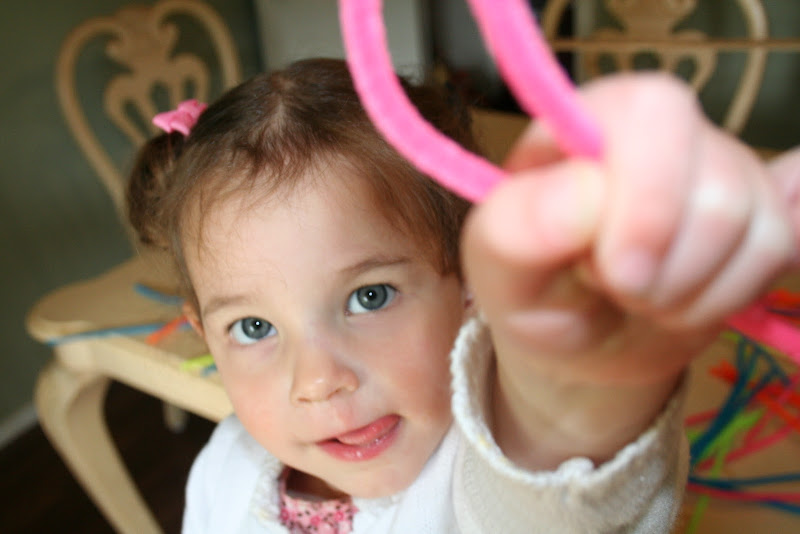 Finally, though, I decided that the fluffiness of the pipe cleaners was just crying out to be woven into something lush and soft.  It also seemed like a good idea because M had never done any weaving before, and I thought the stiffness of pipe cleaners might make a good beginning project.

For the loom, I found a box that was a little less wide than the length of the pipe cleaners.  Using a knife, I poked holes at equal intervals on both sides.  I strung the pipe cleaners through those holes and curled the ends up over the edge of the box to make them stay put. 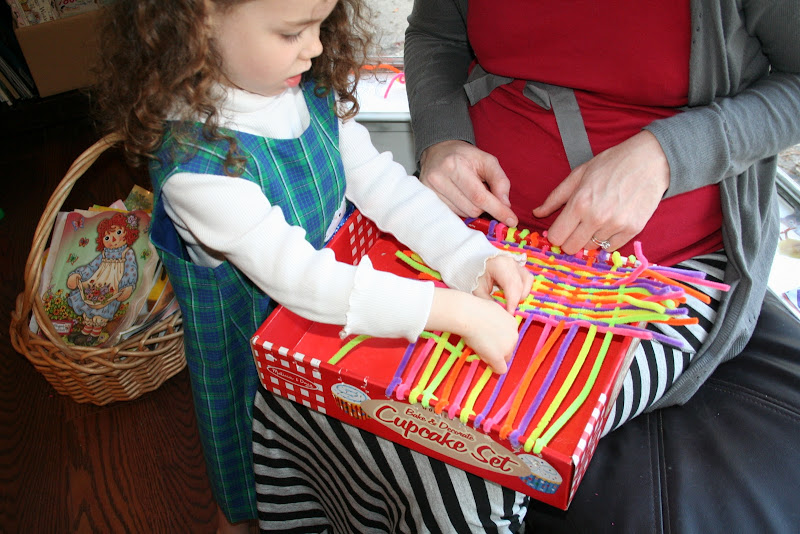 Weaving the pipe cleaners over and under going the other direction did turn out to be pretty easy.  M was able to do a line or two without any trouble, but it was pretty tedious work for her four-year-old fingers; so for most of the project, she picked out the colors for me to weave, and she got to push the lines together tightly after each row (I thought the smushing together part was fun too). 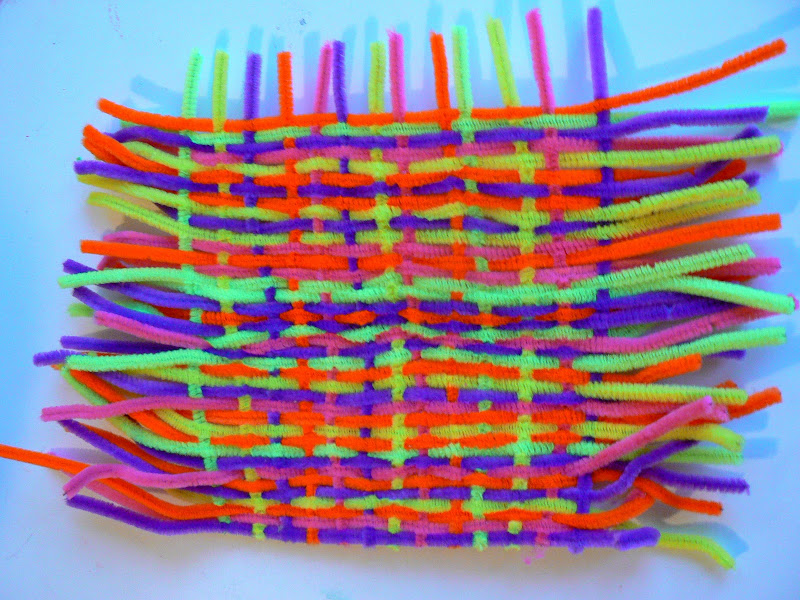 When our swatch of "cloth" was large enough, I cut it off of the loom with a pair of scissors, and turned down the edges of the swatch so the ends of the wires wouldn't be exposed.  (It turned out to be impossible to entirely get rid of the sharpness though, unfortunately)

Then we shaped our cloth into a cute, little bowl.  It really is fun to have a soft and bendy piece of cloth to form into a shape.

While it was a little advanced for my girls, I think there might be a lot of possibility for unique projects with this basic craft.  Any ideas? 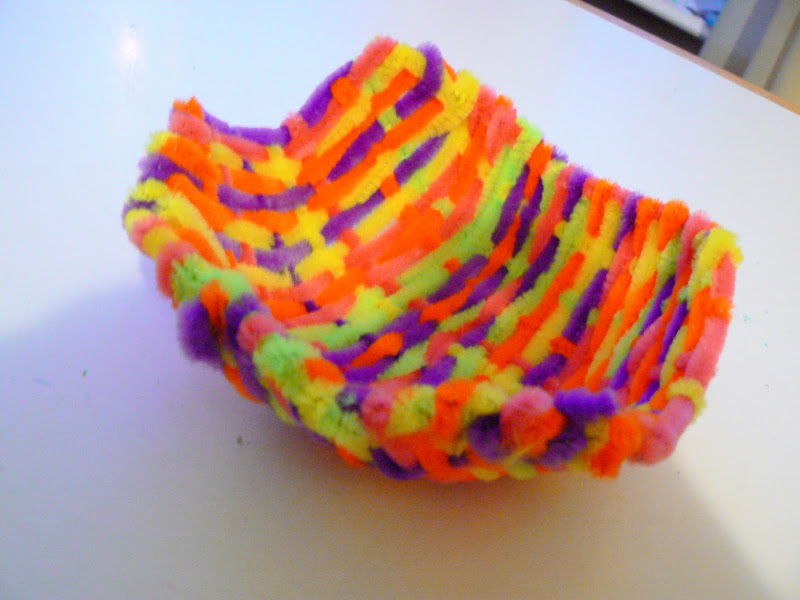 I love this idea! Maybe my almost-6yo could handle this project - the bowl is lovely!