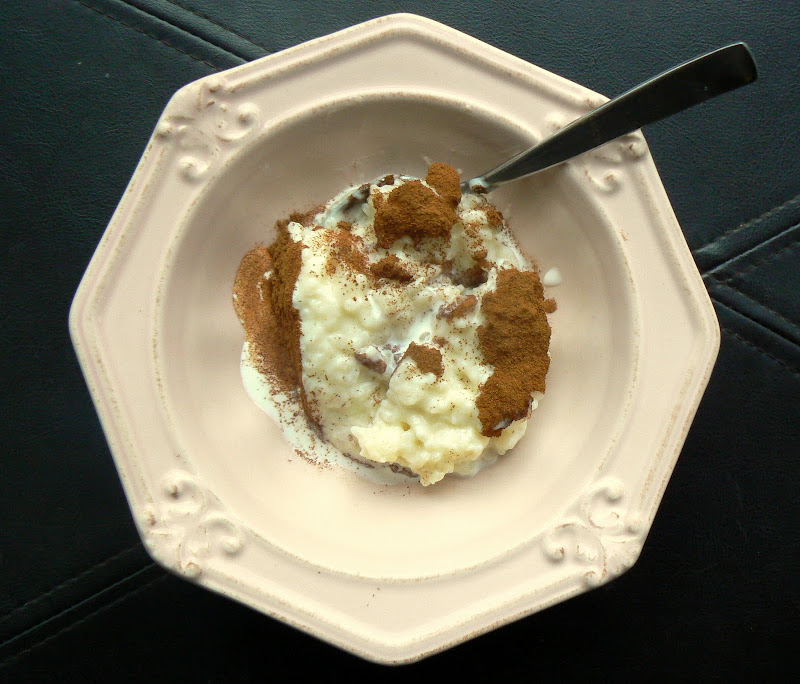 Today as I sat on the computer during the girls' nap I was suddenly overcome by a craving for ice cream (not surprising given my seven-month-pregnant state)  Sadly, there's not a spoonful of it left in the house (also not surprising, given my condition).  So, instead I decided to whip up a batch of my mother's wonderful rice pudding.

It really is absolute comfort food deliciousness.  I'm  probably biased, but I've never had another recipe for rice pudding that I think even comes close.  I think the difference is that this rice pudding is really custardy.

I hardly ever post recipes, but this one really is special- besides, it is dirt cheap to make, and you probably have all the ingredients already.

1.  Combine milk, 2 cups water, sugar, and butter in a large pan.  Combine and heat to a boil.
2.  Add rice, stir, and cook until thick and rice is tender.
3.  Beat the 2 eggs with enough water to make 1 cup liquid.
4.  Remove pudding from heat; add egg mixture, and heat to a boil.
5.  Stir in vanilla.  Pour into ungreased pan, cover liberally with cinnamon, and chill in refrigerator for several hours.  (well, ok- you can have a little while it's still warm too)

You can also feel free to pour on a drizzle or two of half and half  if you like that sort of thing.

Email ThisBlogThis!Share to TwitterShare to FacebookShare to Pinterest
Labels: recipes

I've been wanting to try making rice pudding at home. This one sounds like a good one to try.