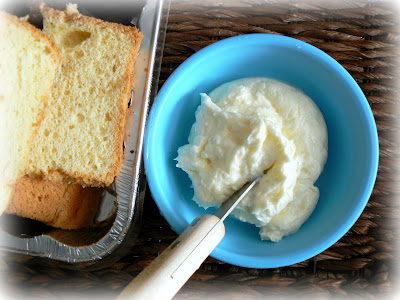 I've seen people making butter around the internet for a while now and always in the back of my mind thought that it probably takes forever and doesn't really turn out that great.  But when our homeschool co-op recently read a book that was a perfect tie-in for the activity (When I was Young in the Mountains), I figured it was time to give it a try. 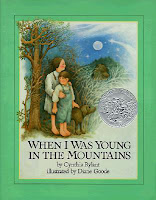 Materials:
Heavy cream (the higher the fat content the better)
Jar or tupperware container for shaking (smaller containers= less time shaking) I used a salad dressing shaker because it was easy for little hands to hold while they shook
Marbles (optional, to aid the mixing process) 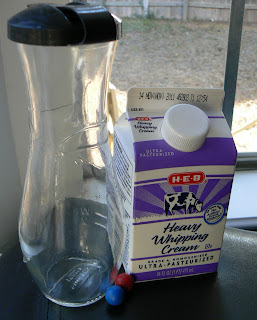 Directions
Fill the jar half-way up with the heavy cream, drop in the marbles and shake, shake, shake.  You don't have to be super vigorous; just keep it moving. 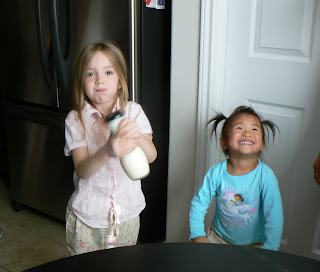 The cream will first turn to a thick whipped cream; shake for a little while longer after that- and suddenly you will see the butter curds separated out from the rest of the liquid.  (It will be obvious) Shake until it doesn't seem to be changing anymore.

Drain the buttermilk off of the butter and reserve for pancakes or something else delicious.

You'll be left with a soft, spreadable butter- slightly wetter than what you would buy in the store.

The Verdict
So...it DID take a long time.  The five kids shaking it had worn themselves out before it was done; so the adults finished it up.  Altogether, it took about 20 minutes of shaking for the butter to form. 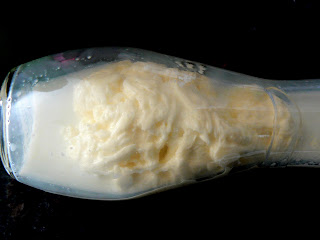 But, the results were super satisfying.  The kids were fascinated by the dramatic change from cream to butter, and it was tasty on the skillet cornbread that we made to go along with the lesson.

If you're on the line about doing this activity yourself, my advice is that it is worth it, but be ready for a good arm workout!

Works for Me Wednesday!
Posted by Katey on November 01, 2011

Yes!!!  Isn't it amazing?   I had also seen it, and always wanted to try it.   My boys and I tried it a couple of weeks ago, and LOVED it.  Then, I took a jar and some cream to a girls' get-together, and impressed the heck out of everyone there!  They're all going to make it for family gatherings from now on.  At our girls get-together, we used half of our cream to make butter for our homemade buns.  Then we also made homemade whipped cream (just don't shake as long!), to go with our pumpkin cheesecake!  TO. DIE. FOR!

Great post! Thinking I may have to try this with the kids and add in a little cinnamon sugar too!!

I remember doing this as a kid - I need to do it with my kids! Your butter turned out great!

Sounds like a perfect retreat- so much more delicious to make things oneself! :-)

huh. Didn't even think of the possibilities for making it flavored butter.  Good idea!

Wow! What a great idea. Thanks. We'll be trying that some time. :-)

now to try with raw cream - check out realmilk.com for sources!

I'm sure it would be scrumptious with raw milk!

Wow!  How awesome!  We will be trying this for sure. :) I would love it if you'd link this up on my blog carnival  Family
Time Tuesday!

LOVE IT! I love activities based on a book. We did this just a couple weeks ago as part of our C is for Cow unit. The kids were so impressed =-) I would love for you come over to my TGIF Linky Party - http://livinglifeintentionally.blogspot.com/search/label/Linkey%20Parties
Beth =-)